Naan the way Indians meant it. Challah as it is shared in Jewish homes. The bread baked in the ovens at Hot Bread Kitchen are as diverse and traditional as the women who work there. In this New York bakery disadvantaged women from all over the world are turned into formidable bakers.

Warm smiles greet us as we enter La Marqueta in Harlem. The welcoming aroma of freshly baked bread wafts from the many unfamiliar loaves displayed on the counter of Hot Bread Kitchen. This is the domain of Shadaya Jackson. “When I started in 2011, I knew nothing about cooking or baking. As soon as I heard the word ‘kitchen’ I was halfway out the door. Hot Bread Kitchen was the last business I sent my resume to, but the first one to call me back. It was a long shot, but I was so happy when I got this job.”

Shadaya has since grown into a fulltime retail supervisor in the small shop at the front of the bakery. “I love it,” she says. “The work here has shown me what my worth is.” And that was one of the goals Hot Bread Kitchen founder Jessamyn Waldman Rodriguez set out to achieve. Early in her career she encountered a paradox in the baking industry. In most of the world it’s the women who are traditionally bakers. In India the women wake up before dawn to make chapati for their families. In Mexico the women are elbow deep in corn flour making fresh tortillas before the sun rises. But in North America and Europe, it’s men who dominate the baking industry. Jessamyn was the first woman in michelin star chef Daniel Boulud’s bakery, and it was there she got the idea to get more women involved in the industry.

In 2008 Rodriguez launched Hot Bread Kitchen, a place for multi-ethnic and poorly educated women to learn how to be a baker, and at the same enjoy an education. The focus is on the women who have the longest odds of ever making manager. The women at Hot Bread Kitchen get 24 hours of on the job training in the bakery every week, and two hours in the school bench. For foreign women that usually involves English lessons. For others it could be cooking techniques or job interview skills. The entire program is aimed at landing women a fulltime job in the baking industry after six months.

‘I like to say we’re the United Nations of bread. The things we make here are a reflection of the breads people eat around the world.’

Every year Hot Bread Kitchen educated sixty women from around the world. ‘Since we started we’ve trained women from 38 different countries to be a baker,’  Jessamyn says. And this diversity is visible in the products coming out of the bakery’s ovens. The women here bake around 70 different types of multi-ethnic bread. From traditional sourdough to msemen. a traditional Moroccan flatbread. “I like to say we’re the United Nations bread,”Jessamyn jokingly says. “The things we make here are a reflection of the breads people eat around the world.” The impact Hot Bread Kitchen has on the women that work here is obvious as we make our way through the Bakery. Behind a a white hot stove and sizzling tortillas we find Mexico-born baker Nancy Mendez. ‘When I started here in 2009, I barely spoke the language,’ she tells us. ‘I learned all of that here. Just like I learned how to make, bake, and shape all these different breads.’ Nancy is now in charge of tortilla production at Hot Bread Kitchen, and she trains the new generation of tortilla makers how to make the perfect tortilla. In English. All they need is corn and lime, with no additives. Just like she used to do back home.

The bread coming out of Hot Bread Kitchen goes to supermarkets, farmer’s markets, and a number of restaurants and hotels in New York city. Jessamyn has big dreams for the future. ‘What we do here is proof the model works,’  she says. ‘We’re thinking about national expansion, and if I dare dream bigger we might go international. Every bread we sell creates an opportunity for education for a woman somewhere in the world. That’s what I want to achieve. Investing in good bread, and opportunities for the women that need them most.’

This article can be found in the digital Food Inspiration magazine 34, with theme: "Trust me". Click here to go to the magazine. 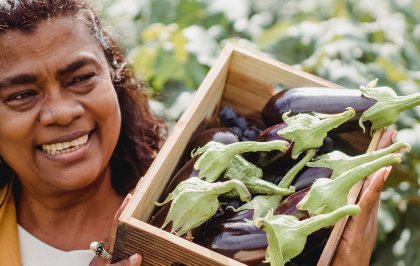